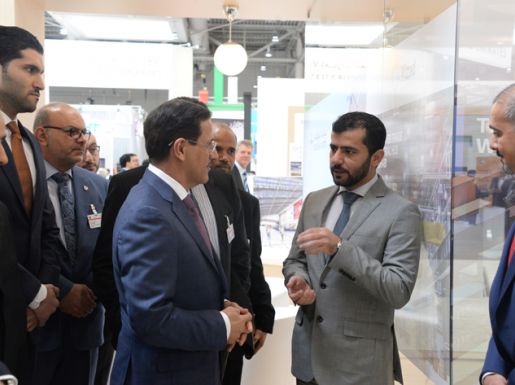 Abu Dhabi Ports, the master developer, operator and manager of ports and Khalifa Industrial Zone (Kizad) in the Emirate, is participating at Hannover Messe Trade Fair for the sixth consecutive year to showcase the consolidated business offerings of Khalifa Industrial Zone Abu Dhabi (Kizad) – the integrated trade and industrial hub of the Emirate, and Khalifa Port – the maritime gateway to Abu Dhabi. The international exhibition is an opportunity for Abu Dhabi Ports to present its decade-long achievements, especially in innovation, as the company is celebrating its tenth anniversary this year.

“At this milestone moment in the history of our company, we are looking forward to all possible opportunities that will help us strengthen our gains and build stepping stones for future. As the maritime business trade enabler in the Emirate, we are keen to broaden our business portfolio as part of the responsibility of contributing to the UAE’s economic diversification. This international exhibition is an ideal venue for us to get new insights in that direction,” said Captain Mohamed Juma Al Shamisi, CEO of Abu Dhabi Ports.

Khalifa Industrial Zone (Kizad) has made substantial contribution to the UAE’s economic diversification efforts, expanding opportunities in trade and industrial sectors. The outstanding access to markets, world-class infrastructure and dedicated investor support offered by Kizad, have already attracted investors from across the globe. Around 90 national and international investors have made investments in Kizad, which has a total of 13 million square metres of land leased that represent a total investment of more than AED 55 billion (USD 14.98 billion).

Located adjacent to Khalifa Port – one of the most technologically advanced ports in the world and the first semi-automated container port in the region, Kizad has the potential to meet future demands of industrial and logistic sectors in the Emirate. The integrated services of Khalifa Port and Kizad offer great opportunity, and long-term competitive commercial advantages, including exceptional supply chain efficiencies to clients.

Khalifa Port was ranked third in the world and the first in the region in September 2015 for the highest growth rate. With its world-class infrastructure, Khalifa Port also set productivity record of handling 2615 moves in just under 13 hours on July 21, 2015. The container terminal also crossed the important benchmark of 200 BMPH (berth moves per hour) on the same day, proving the maximised efficiencies and increased terminal throughput and capacity. Another achievement of 12.5-minute turnaround time for trucks within the container terminal has raised Khalifa Port’s profile as an international maritime hub.

Maqta Gateway – the first purpose built Port Community System (PCS) in the region – developed by Abu Dhabi Ports, will be a game changer in port operations and the Emirate’s trade business. Upgrading the ports in the Western Region of Abu Dhabi is also high on the agenda.  Al Mirfa Port was inaugurated in December 2015, after comprehensive redevelopment. Four other ports – Mugharraq Port, Sila Port, Delma Port and Sir Bani Yas – will also be upgraded soon. Sir Bani Yas Island’s beachfront will be developed as the Arabian Gulf’s first cruise beach stopover by the third quarter of 2016.