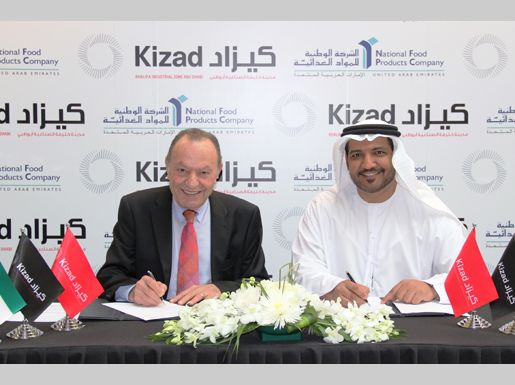 The capital’s biggest infrastructure project, the Khalifa Industrial Zone Abu Dhabi (Kizad), has announced the signing of a long-term 50 year Musataha Agreement with the National Food Products Company (NFPC), one of the largest food producers in the UAE known for its market leading brands such as Oasis, Blu, Milco, Lacnor and Gulf & Safa.

The deal sees an initial investment of approximately AED 1.5 billion in the mega-facility that will be spread across 8,093,469 sq. ft. of prime industrial land, strategically situated mid-way between Dubai and Abu Dhabi.

The signing took place yesterday at the Gulfood exhibition 2014 at Dubai’s World Trade Centre on the Kizad stand, and was executed by Engineer Khaled Salmeen, CEO, Kizad, and Fady Antonios, CEO & President, NFPC.

Commenting on the occasion of the signing, Salmeen said:

“Kizad and NFPC are delighted to announce the signing of this agreement.   NFPC, a food production company which ranks in the top five in the GCC, has chosen Kizad as their next location for its biggest, state of the art food production facility.

Kizad is one of the key drivers in Abu Dhabi’s economic diversification and the safety and sustainability of food supplies is a top priority for the region and an important aspect of the Abu Dhabi Economic Vision 2030.  Contributing to this vision is a core objective for Kizad, reflected in its day to day goals and strategic planning.

Kizad, with the much valued support of the Abu Dhabi Executive Council and Abu Dhabi’s Water and Electricity Authority (ADWEA), is able to attract local, regional and international industrial investors, due to the availability of its excellent infrastructure. The signing of this significant world class investor confirms Kizad’s continuous commitment to the emirate’s diversified economic prosperity”.

After the signing ceremony, a brief discussion with members of the media took place where Fady Antonios from NFPC stated that, “the establishment of the Mega facility at Kizad is a key milestone in developing our operational capabilities to enable a new paradigm of growth for our market leading brands in the food and beverage sector.

The location of Kizad between the two largest economies of the U.A.E. coupled with access to the Etihad Rail and Khalifa Port will create a strategic advantage for us to reach existing and new markets efficiently”.

Kizad announced its first participation in Gulfood this year, one of the world’s biggest annual foodservice, hospitality and retail events, from 23-27 February. Kizad management took the opportunity to make this important announcement about their signing with NFPC, stating that the estimated ground breaking for the factory would take place in Kizad in Q2 2014 and the estimated commencement of operations would be end of Q1 2017.

“With more than 4,200 exhibitors from 152 countries, Gulfood offers an excellent opportunity to showcase our relevant clusters, including Food, Packaging, Mixed use and the Logistics Park, to leading national and international food manufacturers. The food industry in the GCC region promises substantial growth over the next few years and we firmly intend to be a major player in this growth in the further development stages of our industrial zone”, says Engineer Khaled Salmeen, CEO and Managing Director of Kizad.

Considered the fastest growing cluster specific industrial zone in the Middle East, Kizad announced last year the addition of Brasil Foods (BRF), South America’s largest food processing company, who are nearing completion of their AED 533 million facility, set to begin production in mid-2014. The facility at Kizad, the largest ever built (1,743,000 sq.ft.) by the company outside South America, will be producing meat products, marinated processed foods and bread based foods under the Sadia and Perdigão brands.

According to an international report published in 2013[1], over the next 3-4 years the GCC region’s food consumption is expected to grow at a Compound Annual Growth Rate (CAGR) of 3.1 per cent, with an expected spending on food to reach USD 106 billion. The report also revealed the UAE as the leading GCC country in terms of annual food per capita consumption (1,486 kg), followed by Oman (1,095 kg) and Saudi Arabia (872 kg).

Designed in line with Abu Dhabi’s Economic Vision 2030, Kizad is a significant driver in the diversification process of the emirate’s economy. Besides food, the industrial zone covers the sectors of aluminium, base metals, healthcare and pharmaceutical equipment, chemicals, plastics, packaging and paper, mixed use, trade and logistics.

All sectors are organized in vertically integrated clusters which are in close proximity to one another, offering down, mid and upstream producers most time and cost effective production lines. In addition, Kizad provides excellent market access through its adjacent Khalifa Port, the first semi-automated port in the GCC region, which offers access to more than 4.5 billion people within four time zones.

Other factors, which have been attracting a growing number of investors over the past years, are Kizad’s low utility costs and ease-of-doing-business environment which facilitates relationships with government agencies, licensing authorities and utility companies in order to help tenants get their business started as quickly and efficiently as possible.

Kizad’s new food investor announcement at this year’s Gulfood will pave the way for this zone to attract more food producers to take advantage of its multi-modal transportation infrastructure by road, sea, air and soon by train.